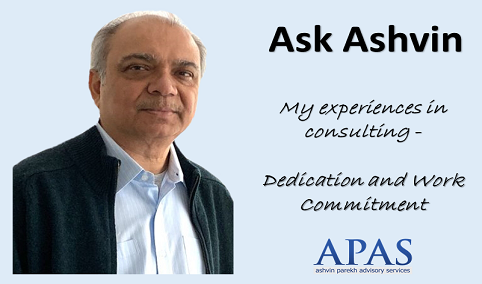 “Sincerity and truth are the basis of every virtue” ————- Confucius

In the early part of my career, I was in industry. After about 5 years with two multinational companies, I switched to management consulting and joined A. F. Ferguson Associates, a KPMG affiliate, in Mumbai. Business advisory as we know it now, way back in 1981 was called management consulting. The profession was taking its roots then.

This blog is to discuss my experiences as a beginner in consulting and focusses on the dedication and a deep sense of commitment to clients, I saw in my managing partner Mr. L K Ratna.

A Chennai (earlier Madras) based industrial conglomerate had sought some business approach and diversification opinion from the firm. LKR as he was fondly called by us had travelled to Chennai and had meetings with the seniors and the board members of the business house. He had meeting for four days and gathered required information and almost formed a view on the matter. He took a flight on a Thursday evening and had promised the client to offer opinion report by following Monday. It was a highly confidential engagement and had a small team of myself and my senior manager.

LKR had a trusted old driver who was to pick him up from the airport. I believe the driver had a drink too many and between Santacruz airport and Khar the car had a head -long accident with another vehicle. LKR was admitted to the hospital with several glass shreds pierced in his body including his face. After removing the shreds, the doctor had bandaged his entire face almost, blind folding him. We were told about the accident and the administration had clearly informed us not to disturb him by visiting the hospital.

On Saturday morning, I received a phone call from my senior manager that LKR had requested both my senior and me to be at the office on Saturday late afternoon and await further instructions.

When we were at office, LKR’s executive assistant Bhakta was at the office to instruct us about the task at hand. LKR had dictated the report, from his hospital bed, entirely blind folded. We were told that there were separate notes and small scribblings and chits of paper where LKR had noted some numbers, some observations and views during the four days of his Chennai visit.

The notes were written on the hotel and client stationery where the meetings were held. They had dates, time mentioned on it. We were instructed to study those. Where there were financial and key parameters noted, there were instructions on approach to the projections he had prepared, in neat tables. Whilst we were studying the notes, Bhakta was typing the report, from out of his shorthand writing pad. LKR had dictated about 30 pages of the report which was promised to the client. It had the firm’s analysis and recommendations on the diversification program of the client’s business group.

It was almost dinner time, when we were ready with the first draft of the report. The administrator had organized dinner for us and, with the final actual performance, cash flows and the investment projections, it was about sixty pages of the report for the client. We left almost at midnight.

We were to re-assemble on Sunday afternoon to complete the rest of the work. Bhakta went to the hospital and read the report to LKR. He made some corrections, in that state of his health and dictated a crisp, clear conclusion section of the report.

Bhakta came back to the office, we proofread it once more and thereafter Bhakta cut the stencil sheets and gave it to us for last proof reading. Those days the printing equipment was a “cyclostyle” machine for making multiple copies, utilizing a stencil cut by a graver with tip which used to be a small rowel.

Bhakta rolled out six copies of the report, prepared the covering page and the table of content. We examined the report once again, read it threadbare, with a “tooth comb” as LKR used to describe. The administrator than bound the report and personally, under instructions of LKR delivered it, on Monday morning to the client.

For our Sunday dinner, the administrator had organized a table for three, at Oberoi across our office. None of us were keen to have dinner. There was a deep sense of dejection and depression for LKR’s health. We took a cab back home. We talked a little on the way, lost in our sorrowful thoughts and prayed for LKR’s good health.

After about two weeks, LKR was to be discharged from the hospital. He had recovered but had bruises on his body. He was required to go through a complete body check.

Sadly, he was detected of abdominal cancer. He was perhaps in the last stage of it and after a few months of treatment and struggle, succumbed to death. He was in his mid-forties when he died.

I was along with some of my colleagues, fortunate to have a senior like LKR, who taught us a key lesson in our career in  consulting profession. No matter how smart you may be, and perhaps you may be even beyond the others in regard your intellect and knowledge, the single ingredient that builds your professional career is the sense of commitment and devotion to your work.